According to a recent study, retirees will collectively lose $3.4 trillion in potential income that they could spend during their retirement because they claimed Social Security at a sub-optimal time. 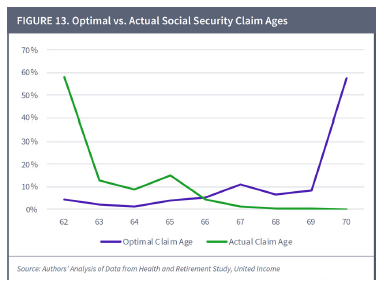 Nearly all of this income is lost because one or more retirees in a household claim Social Security too early, which means their Social Security benefit is lower than it would be if they had waited. For instance, a person that would receive a $725 monthly benefit if the y claimed Social Security at 62 would see that benefit increase to $1,280 if they had delayed until their 70th birthday, an increase of 77%. Spread out across the population of individuals that are claiming Social Security sub-optimally, those extra dollars add up to a substantial amount of money.

The comprehensive study observed 2,024 households, considering each household’s outside resources, spending, health, and longevity to determine how much income and wealth they would have if they had taken Social Security at the various ages of eligibility.

This appears to be the first study of its kind to consider the impact of claiming age on not just the Social Security income, but other assets and income as well, as optimal Social Security claiming can lead to higher account balances, which in turn generate more income.

Although later claiming typically caused wealth to drop during retirees’ 60s as they drew down their personal retirement accounts, this wealth drop was more than made up for by the late 70s when Social Security income was higher. In order to isolate the effect of claiming age, the study did not consider the effect of working longer, but in real life, a person who decides to maximize benefits by claiming at 70 might choose to work a few years longer, and this would mitigate some or all of the wealth drop in their 60s.

Sadly, financially suboptimal decisions add up to a loss of $2.1 trillion in wealth and a loss of $3.4 trillion in income. In its conclusion the report mentions a few ways to deal with this, including:

We believe that households contemplating Social Security strategies can benefit from a customized analysis that shows the lifetime impact of the various claiming options. With the help and advice of an advisor, you have a shot at being one of the 4% who end up making optimal Social Security claiming decisions. Not only will this increase your Social Security income, it may lead to higher income and wealth from other sources as well.

Meanwhile, a recent Gallup poll found that 57% of nonretired Americans expect they will live comfortably in retirement, a six-point increase in positivity since last year and the highest reading since 2004.

While it is likely that Social Security benefits will turn out to be a more important source of income than current non-retirees think, most people will be better off financially in retirement if they work on getting other sources of income together. It is possible some of the 57% of current retirees who see Social Security as a major source of income didn’t feel that way when they were working. But circumstances—the financial crisis of 2008, forced early retirement, lack of savings, disappearing pensions—have turned it into a lifeline.